A poignant reminder of those local people who made the ultimate sacrifice during World War I has been installed close to a village war memorial.

Harborough District Council has installed the striking metal figure next to the War Memorial in Frolesworth Road, Broughton Astley. 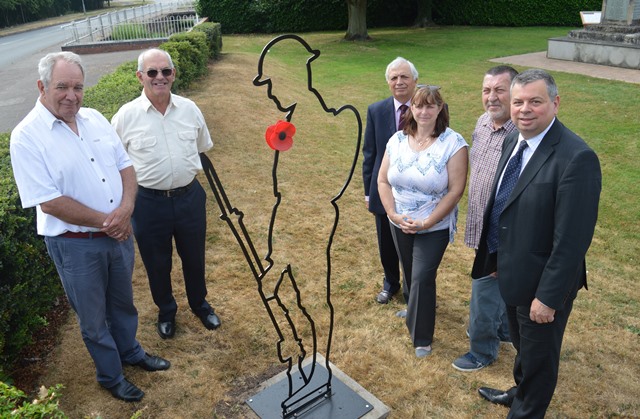 Cllr Neil Bannister, Leader of Harborough District Council, said: “I was proud to be associated with the provision by Harborough District Council of this WWI silhouette for the residents of Broughton Astley. It is vitally important we recall the great sacrifices made during the War and this ‘there but not there’ silhouette is a moving reminder. I thank the parish of Broughton Astley for agreeing to have this commemorative piece in their Memorial Gardens to mark the anniversary of the ending of the Great War 100 years ago.”

Cllr Colin Porter, vice chairman of Broughton Astley Parish Council, said: “This silhouette is particularly thought-provoking and I’m sure it will remind people of the local soldiers who gave their lives. I’m looking forward to the other silhouettes being installed; it will be especially poignant during the annual memorial service held there.”

The installation is part of the district council’s plans to commemorate the centenary of the end of World War One, as well as the anniversary of 1918 Representation of the People Act which, for the first time, gave women the right to vote.

Other plans, as part of the commemorations, include naming streets after those who fought in the 1914-1918 war and/or women who fought for the right to vote, and an art installation.