Charity Lunch in Honour of Suffragettes

The influential role of the Suffragettes in giving women the right to vote for the first time has been honoured at a special charity event. 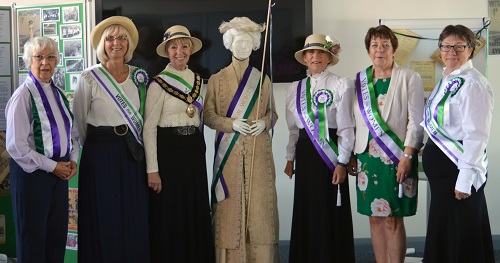 Councillor Lesley Bowles, Chairman of Harborough District Council, hosted the luncheon event at The Symington Building in Market Harborough to commemorate 100 years since women were first granted the right to vote and the important role the Suffragettes played in this historic landmark. The event also raised funds for a women’s charity Bridge House, part of Action Homeless, a voluntary sector project used by HDC, providing accommodation and support to homeless women and their children.  This is a women-only project and works predominantly with women fleeing domestic violence and sexual abuse – providing a staffed service 24 hours a day.

Thirty-one women from around the district attended the event, including female civic dignitaries, councillors and leading business women.

Cllr. Bowles said: “Alongside the commemoration of the Suffragettes’ sacrifices in achieving votes for women, it is important that we help support women today, and donations from today will be forwarded to them to help their on-going work. “

The Charity lunch, held in the Council Chamber

The Representation of the People Act 1918 widened the right to vote by abolishing practically all property qualifications for men (which had restricted many men’s right to vote) and – for the first time – granting the right to vote to women over 30 who met minimum property qualifications. The breakthrough for women’s suffrage was accepted as recognition of the contribution made by women defence workers. However, women were still not politically equal to men (who could vote from the age of 21); full electoral equality did not occur until the Representation of the People (Equal Franchise) Act 1928.

As part of the commemorations, Harborough District Council is also commissioning a piece of public art to mark the centenary and residents’ can nominate their chosen artist via the Council’s website at www.harborough.gov.uk/artwork  until 12 August 2018 or view the artists’ exhibition at The Symington Building (near reception) in Market Harborough.