A poignant reminder of those local people who made the ultimate sacrifice during World War I has been installed close to a town war memorial.

Harborough District Council has installed the striking metal figure next to the War Memorial in Lutterworth at the junction of Church Street and George Street. 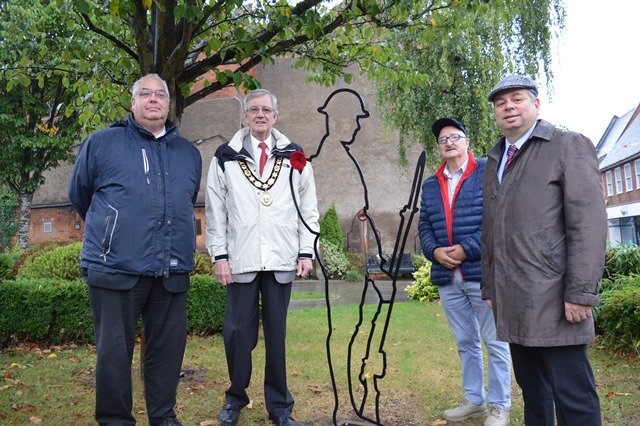 This new addition follows the installation of new energy-efficient lights at the war memorial provided by the district council through its Section 106 (developer contributions) funding pot.

Identical WWI silhouettes have been installed in Broughton Astley and Market Harborough, next to their respective war memorials, as part of the council’s 100 year anniversary commemorations marking the end of WWI.

Lutterworth Mayor Brian Poulter said: “In this centenary year, it is important to have a new symbol so the younger generation can be reminded of what happened and the effect it had on the generation at that time.”

Dick Stilgoe, Chairman of the Lutterworth and District branch of the Royal British Legion said: “This memorial garden means everything to the RBL and the people of Lutterworth and this silhouette is a welcome addition.”

The installation is part of the district council’s plans to commemorate the centenary of the end of World War I, as well as the anniversary of 1918 Representation of the People Act which, for the first time, gave women the right to vote.

Other plans, as part of the commemorations, include naming streets after those who fought in the 1914-1918 war and/or women who fought for the right to vote, and an art installation.