The district council has put the wheels in motion to step up the way it tackles environmental crime – with the launch of a new 4x4 vehicle.

The Ford Ranger, launched by Harborough District Council this week, will be seen out across the Harborough district and will be used to combat and deter environmental crimes such as flytipping, littering, dog fouling and abandoned vehicles. 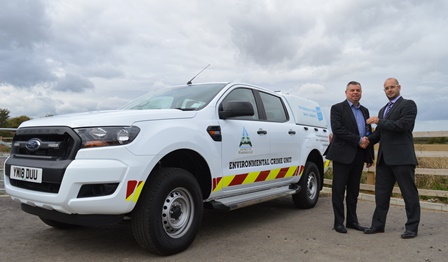 Not only will it be used in towns and urban areas it can also be used on hard-to-reach rural terrain and is fitted with a camera to record incidents such as littering from vehicles.

The vehicle can also be deployed by the Council in emergency situations.

Councillor Neil Bannister, Leader of Harborough District Council, said: “This latest addition shows our commitment to tackling environmental crime and ensuring our district is as clean and safe as it can be. While most people take pride in our countryside, there are a minority who do not and this vehicle will help target those who are content to blight our district.”

The vehicle has been provided by Harborough District Council and the Council’s environmental services contractor FCC Environment.

Councillor Jonathan Bateman said: “Most flytipping incidents, for example, happen in remote locations, such as bridleways, but this vehicle will be able to get out and about and respond to incidents wherever they are. Not only will it be used for enforcement, it can respond to incidents as part of the Council’s remit in dealing with emergencies such as floods.”