Restrictions in Leicester and parts of Leicestershire

Latest information about restrictions for Leicester and parts of Leicestershire due to an increase in positive test results for coronavirus. Harborough District is not included in the lockdown area.

See the restrictions and a map of the area

Two striking and poignant pieces of artwork have been unveiled to commemorate the centenary of two historic milestones.

The stunning images have been installed as part of Harborough District Council’s commemorations of 100th anniversary of the end of World War One and the Representation of the People Act 1918, which granted some women the right to vote for the first time.

The eye-catching pictures have been created for the Council by local illustrator Jon Holder – who is known for his promotional designs for Council events such as Harborough by the Sea and the Classic Car Show. 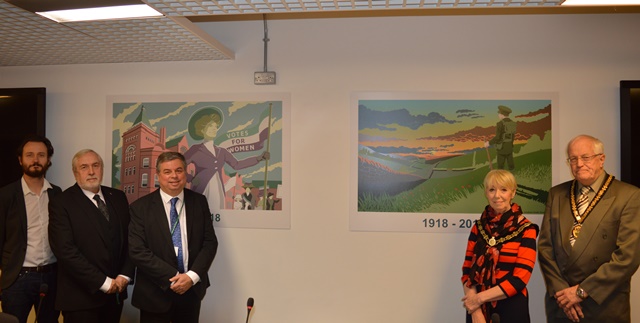 The images, which will take pride of place on the wall of the Council Chamber, were unveiled by the Council Chairman Lesley Bowles, Council Leader Neil Bannister and Councillor Phil Knowles.

Cllr Bowles said: “These images are extremely profound and poignant and I was very honoured to unveil them. The artist, Jon Holder, has a real talent and we are very proud to display his work in the Council chamber for all to see.”

Cllr Neil Bannister said: “We are very proud to be marking these two significant landmarks this year and these pictures are a fantastic addition to some of the installations, including silhouettes and benches, which have been provided across the district in this anniversary year.”

In December, another piece of artwork, by local artist Derek Hunt, which was selected by the public will be unveiled at The Symington Building to mark the Representation of the People Act 1918 – a breakthrough for Women’s Suffrage.

Artist Jon Holder said: “I was honoured to have the opportunity to produce artwork commemorating such historical milestones. It’s always a challenge, particularly when the subject matter is so close to people’s hearts – you want to get it right. Hopefully I’ve done it justice with these pieces.”