A new high-tech monitoring station has been installed in the Kibworths as part of Harborough District Council’s plan to improve air quality in the area.

Generally the air quality in the district is good; however monitoring in the Kibworths during 2016 found levels of nitrogen dioxide which exceeded the annual mean air quality objective along a small section of the A6 Leicester Road. 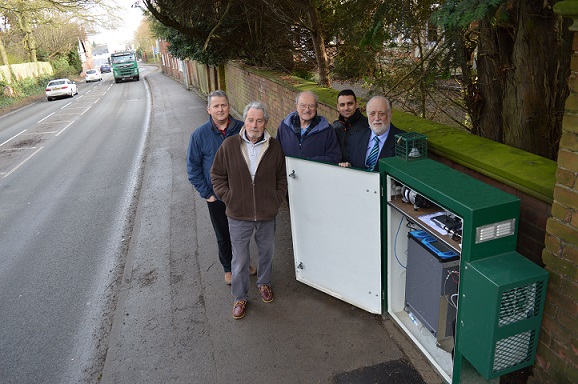 As a result, an ‘air quality management area’ was declared by Harborough District Council and an action plan devised following feedback from the public.

The monitor, funded by Harborough District Council, has been installed in Leicester Road, Kibworth Harcourt, and data readings will be available to view as soon as the monitor is fully connected.

Once operational, it will be used by the Council to analyse hourly trends and test, more accurately, against air quality standards set by government. This will help inform the action plan, which also includes traffic surveys and possible junction improvements, with the aim of reducing nitrogen dioxide levels along this road.

Cllr Jonathan Bateman, portfolio holder for Environment and Regulatory Services, said: “Whilst air quality is generally very good in the district, when there are issues it is crucial we work to address these working with local residents. As part of our action plan to improve air quality in this area this monitor will provide daily air quality updates which will be available to view via a link on the Council’s website.”

Cllr Phil King, deputy leader at the Council, said: “This monitor will provide more accurate readings than the previous diffusion tubes and offer a great deal of clarity to the situation.”

The Kibworths is the second air quality management area to be declared in the district after Lutterworth High Street in 2001.

Once the monitor is live the air quality data will be accessible via a link on the Council’s website at www.harborough.gov.uk/airquality