A new charge-up point for electric vehicles has been introduced in Kibworth Beauchamp and will be available to use soon. 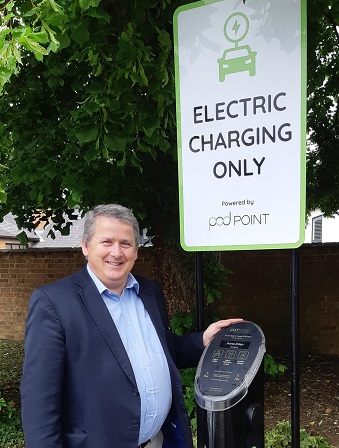 Harborough District Council has installed the electric charge-up point, with associated bays, in the School Road car park in the village. The charging point will be able to charge up two vehicles simultaneously.

This follows the introduction of electric car charging points at Council-owned car parks in Lutterworth, Broughton Astley and Market Harborough.

Cllr Jonathan Bateman, the Council’s car parking lead, said: “We are responding to the increased use of electric vehicles as a greener way to travel and are very pleased that we have been able to install electric vehicle charging points across the district – and now in Kibworth Beauchamp.”

Cllr Phil King, Leader of the Council and assets lead, said: “We are continuing to enhance our car park assets and also encouraging people to use electric vehicles as a more sustainable way to travel as part of a commitment to doing what we can to reduce greenhouse gases and climate change.”

It will cost just 20p per kwh to charge vehicles – paid for via the Podpoint app which can be downloaded on mobile devices. There is a maximum stay in the electric charge point bays of three hours. The app also provides details of other locations of charging points across the country.

The new charging points in Kibworth Beauchamp will become operational over the coming weeks.