This was celebrated as the official certificate was presented by the town’s Fairtrade Steering Group to Harborough District Council at a meeting on Monday 24 June 2019. 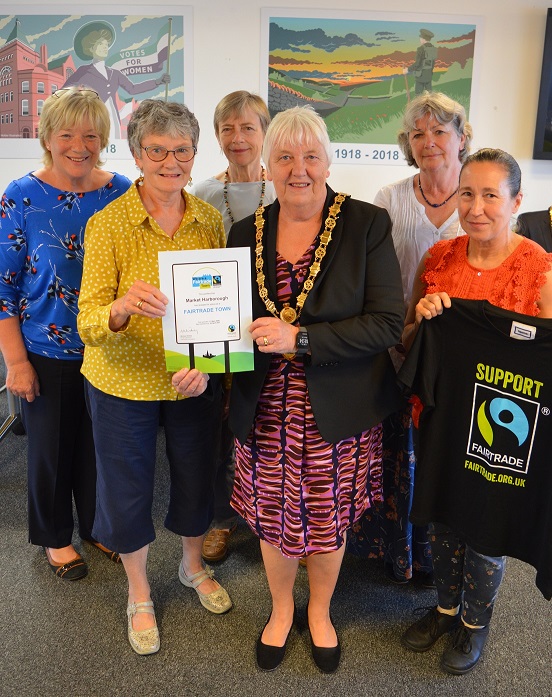 The Fairtrade Steering Group was supported by Harborough District Council in renewing its Fairtrade Status.

Fairtrade helps small-scale farmers ensure they earn stable incomes and have long-term contracts with companies. In addition, they earn the Fairtrade Premium, which they invest as the farmer-owned co-operative democratically chooses, in projects that will benefit their business or community.

Market Harborough was first awarded the Fairtrade status in March 2006 in recognition of the strong support for Fairtrade within the town, and the achievement of five qualifying goals, such as a wide availability of Fairtrade products in local shops and catering outlets, high levels of support from local people, businesses, the Council, faith groups and schools.

Cllr Barbara Johnson, Chairman of Harborough District Council, said: “This is an excellent achievement for the town and for all those involved; I hope it inspires other towns across the region.”

Anita Beer, of the Market Harborough Fairtrade Group said: “The changes to the climate around the world are causing extra hardship to countries that are less equipped to cope. Where groups and communities there are supported by Fair Trade, they are helped to diversify their crops, find ways to enrich the earth and develop strategies to stop soil erosion so they have a sustainable future.”

Adam Gardner, Communities Campaigns Manager at the Fairtrade Foundation, said: “We’re very pleased that Market Harborough has renewed their Fairtrade status and laid out clear exciting goals to take Fairtrade further. Thanks to the ongoing support of the public and campaigners, an increasing number of farmers in developing countries are now selling their products on Fairtrade terms, bringing them a stable income, and the chance to trade their way out of poverty.”

The town’s Fairtrade Steering Group revealed its plans to promote Fairtrade to more community groups and businesses in the area by taking part in campaigns, including the UK-wide Fairtrade Fortnight, at the end of February.

They will also be holding what has become the annual Kilombero Rice Challenge in the Autumn, a Fair Trade and Eco Fair in November and an invitation to the Harborough District to expand Fairtrade in the whole area. The group also hopes to find a way to recognise the town’s Fairtrade status on road signs welcoming people to the town.

The Fairtrade Mark independently certifies that products meet economic, social and environmental standards. As such, it is the most widely recognised ethical mark worldwide.

For more information, about the Fairtrade Mark and how to apply for Fairtrade status, visit www.fairtrade.org.uk