A hero solider, who was killed in action whilst charging an enemy patrol during World War One, has been honoured after a street near his former home in Fleckney was named after him.

Private Alonza Garner was a member of the Leicestershire Regiment of the British Army when he was killed in action in Flanders, in Belgium, in 1917 aged just 19. 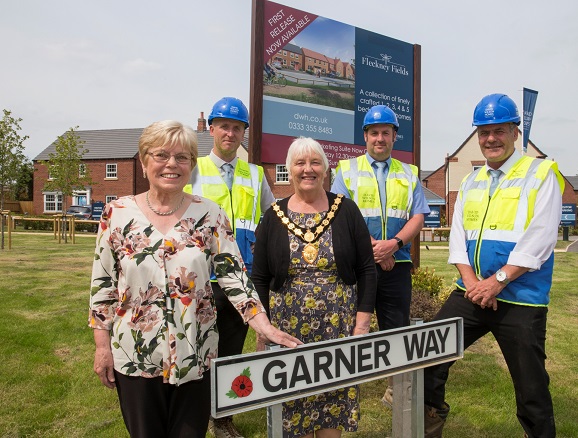 Private Garner was part of a group of soldiers who came under fire during a charge on an enemy patrol. During the battle, Private Garner and his unit came under heavy fire from a covering party on nearby high ground with considerable casualties.

Private Alonza was shot through the neck and killed as he was charging the enemy with his bayonet.

This week, Harborough District Council unveiled a new street sign for Garner Way, emblazoned with a symbolic poppy – a tribute to the hero solider – at the new David Wilson Homes development Fleckney Fields. The new street is close to Private Garner’s former home in Kilby Road.

Private Garner’s great niece Dorothy Burt, of Fleckney, had nominated her great uncle as part of Harborough District Council’s call for residents to put forward names of local soldiers who fought and died during The Great War with a view to naming local streets after them. The 2018 initiative by the Council marked 100 years since the end of World War One.

Mrs Burt, who attended the unveiling, said: “This is such a fitting tribute to my great uncle, and his brave sacrifice for his country, and I would like to thank Harborough District Council and David Wilson Homes for making it possible.”

Cllr Barbara Johnson, Chairman of Harborough District Council said: “It was quite moving to find out that Mrs Burt and I both had great uncles who fought in World War One – and it was poignant to discover that the similarity did not end there. Sadly both – Alonza Garner and Bernard Steel – lost their lives in Flanders. Garner Way preserves Alonza Garner’s memory and contributes to Fleckney’s story of the past.”

John Reddington, Managing Director at David Wilson Homes East Midlands, said: “It was a great honour to be involved in the tribute to Alonza Garner and we’re pleased to be contributing to his lasting legacy at Fleckney Fields. We were delighted to welcome Mrs Burt and Cllr Johnson to the development to mark such a special occasion.”