A Kettering man has been fined £300 after rubbish removed from his house was fly-tipped in a village in the Harborough district.

The rubbish (pictured), which consisted of garden and household waste, was dumped in July 2019 at Rockingham Road in Great Easton but was traced back to the resident following an investigation by Harborough District Council. 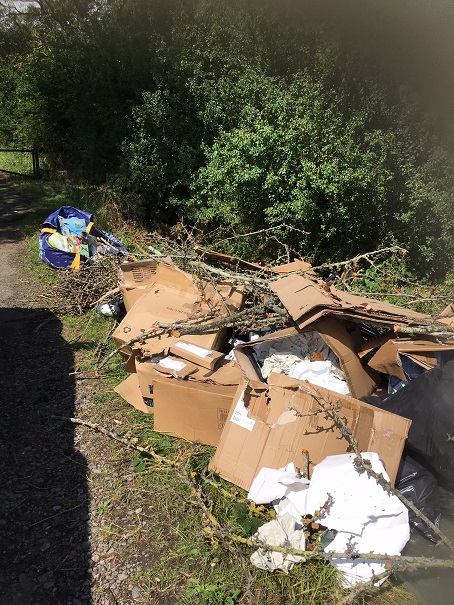 The man was apologetic, when questioned by the Council’s environmental crime officers, and claimed he had made a mistake by letting someone else dispose of the rubbish which belonged to a former resident.

He was issued with a fixed penalty notice after admitting to the offence under the Environmental Protection Act.

Councillor Jonathan Bateman, Harborough District Council’s regulatory lead, said: “Flytipping is unacceptable; this case highlights how important it is to check that anyone removing rubbish from your property is legally allowed to do so. You could face a fine if you don’t.”

The Council’s large waste items for collection service allows for up to three large household items or 12 sacks of waste to be collected for a charge of £34.17.

Harborough District Council's anti-flytipping campaign 'Tip Off' continues to help people report cases of fly-tipping and provide information to help with investigations. It has also resulted in a number of prosecutions and fines.