A WW1 veteran whose ashes have been unclaimed for over 60 years has been granted a final resting place with his family in a Market Harborough cemetery.

Percy Walter Arthur was born in Market Harborough in 1888 and raised in the town with his four siblings. 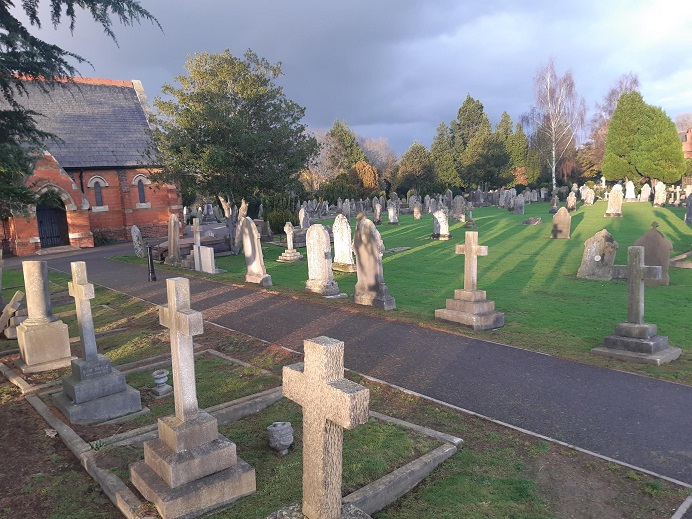 In 1910, aged 22, Percy – who according to records stood six feet tall, with black hair, blue eyes and a fair complexion – sailed from Southampton aboard the ship Adriatic to New York City. He soon became a US citizen, but returned to England and married Maud Ludgate before enlisting in the Royal Navy during World War I.  He served aboard the ships HMS President II, HMS Daedalus, and HMS President until 1918.

Having moved back to the USA, and lived in Cincinnati and Minneapolis, in the later part of his life, Percy was living in a care facility in Portland, Oregon, when he became ill with a blood clot. But instead of sending him to a medical hospital, he was sent to the Oregon State Hospital in Salem – the psychiatric institution made famous in the Oscar-winning film One Flew Over the Cuckoo's Nest. He died there in less than one day aged 68.

After Percy died in 1956, the British Benevolent Society (ex-pats from Britain living in the US) were contacted and, whilst they paid for his cremation, his ashes were unclaimed so the hospital held on to them along with thousands of others – until a patient named Ed Klinkman died at the hospital in 1961.

Ed's ashes were supposed to be shipped to a mausoleum in Portland, Oregon.  But Percy's were accidentally sent instead.

Earlier this year, US genealogist Phyllis Zegers, from Roseburg, Oregon – who was keen that Percy find an appropriate resting place – contacted Harborough District Council as she believed Percy’s parents were buried in Market Harborough.

Phyllis (pictured), who discovered Percy Arthur whilst researching the lives of 3,500 Oregon State Hospital patients whose ashes were unclaimed, said: “In claiming Ed Klinkman' ashes, Ed's family learned it was Percy's ashes that had been sitting in Ed's niche for 58 years. To make room for Ed in his own niche, the mausoleum said Percy’s urn would need to be removed. I told Ed's family I'd take Percy's ‘cremains’ while I researched his life in the hope of finding living relatives or a suitable final resting place. I contacted the Commonwealth War Graves Commission, but they said even though Percy was a British Royal Navy veteran of WWI he did not qualify for burial in a war cemetery.”

Following some research by Harborough District Council the graves of his parents William Walter Arthur and Emily Elizabeth Beazley (who is also buried with Percy’s sister Mable Grace Arthur, who died in 1908) were located at Market Harborough cemetery (pictured).

After the discovery, Harborough District Council contacted Phyllis to say the Council would be happy for the ashes to be relocated and would fund the cost to allow them to be interred at Market Harborough Cemetery in Northampton Road alongside the graves of his parents and sister.

Cllr Paul Dann, who has responsibility at Harborough District Council for cemeteries, said: “This is such a fascinating story; we are so grateful to Phyllis for getting in touch with the Council so Percy’s ashes could rightfully be brought back to his hometown to allow his final resting place to be alongside his family. As a WW1 veteran from the Harborough district, this was the least we could do for Percy – particularly so close to Remembrance Day.”

Percy’s ashes remain in a copper urn (pictured below) made by psychiatric patients at the Oregon State Hospital.

View a short trailer of a documentary about the unclaimed remains at Oregon State Hospital.