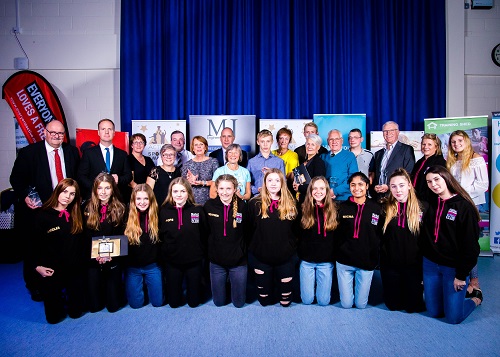 The popular event, hosted by Harborough District Council and main sponsor for the evening Everyone Active, was attended by over 200 people to celebrate sporting achievements across the District.

Nominations for the awards were made by residents across the District, and an independent panel of judges made the difficult final decisions within each category.

International Welsh Master’s hockey captain, Gaynor Nash and Active Harborough’s Leanne Plummer were entertaining comperes for the evening. The room was full of laughter, and at times guests were also moved to tears.

Norman Proudfoot, Joint Chief Executive of Harborough District Council said: “It’s wonderful to see so many inspirational local sports people at the event. We have some amazing and very dedicated nominees who are integral in supporting an accessible Healthy Harborough for all.”

Each award was sponsored by a local business, which also provided a prize for the winner.

Everyone Active Manager, Matthew Hopkin said: “Everyone Active are proud to sponsor this fantastic event which celebrates the achievements of our local sports people – many of whom often go without recognition”.

The event also raised money through a raffle in aid of Gems Charity and The Lewis Foundation – two local cancer charities which provide support for people having treatment for cancer.