Council Chairman to continue in role for next year

The current Chairman of Harborough District Council, and Vice Chairman, will continue in their civic roles for the coming year.

Cllr Stephen Bilbie received the chains of office last year but will remain as Council Chairman for another year throughout 2021/22.

The current Vice Chairman Cllr Neil Bannister, ward councillor for the Dunton ward, will also continue in the role for the coming year. 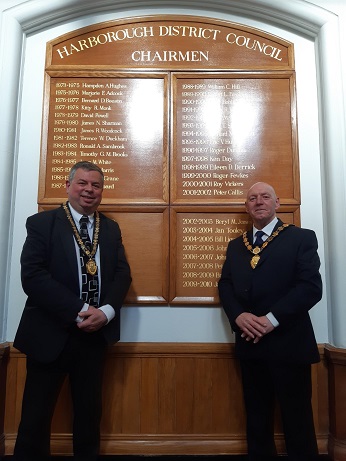 It was agreed at the Annual Council meeting on 5 May 2021, that due to the limitations on events and fundraising opportunities, as a result of the coronavirus restrictions, the current councillors in post should continue in their civic roles.

Cllr Bilbie, a district councillor for the Fleckney ward since 2015, will continue to support his chosen charity Vista, which works with people with sight loss and their families in Leicester, Leicestershire and Rutland.

The only other Chairman to carry on for a second term was Col. Hampton A Hughes, the Market Harborough Urban District Council’s first Chairman in 1973-1974 who continued in the role again in 1974-1975 when the Council merged with the Rural Districts of Harborough, Billesdon and Lutterworth to form Harborough District Council.

Cllr Bilbie said: “The last year has been very challenging for everyone and, whilst I was able to attend some events as part of my civic duties, they were very limited. As a result, it has been very difficult to raise funds for my chosen charity Vista. I am delighted and honoured that my fellow councillors have agreed that myself, and the Vice Chairman, are able to continue to serve the district for the year ahead, as we all look forward to, hopefully, a more positive year.”

During this very unprecedented year, the Chairman, Cllr Bilbie, was very grateful to be able to engage with different groups and organisations throughout the district virtually, via Teams meetings.  These included individual meetings with a small number of primary schools to talk about his role, and also hold ‘mock’ Council meetings; holding a remote Armed Forces Veterans Breakfast Club meeting with members from the Lutterworth and Market Harborough branches; along with the Vice-Chairman, Cllr Bannister, meeting with some members of the Scouts groups from around the district.  On his birthday, the Chairman completed a virtual sponsored bike ride from his front room, covering a total distance of 61.10miles/98.33km.  He is very grateful to all those who supported him, helping him raise £410 for his charity Vista.  The Chairman was also very honoured to be invited to attend the Service of Thanksgiving and Remembrance at Leicester Cathedral, for HRH Prince Philip, The Duke of Edinburgh.