Fly-tipping in district falls for second year in row

Harborough District Council's successful Tip Off campaign continues to drive down fly-tipping in the Harborough district – bucking the national trend which has seen incidents increase. 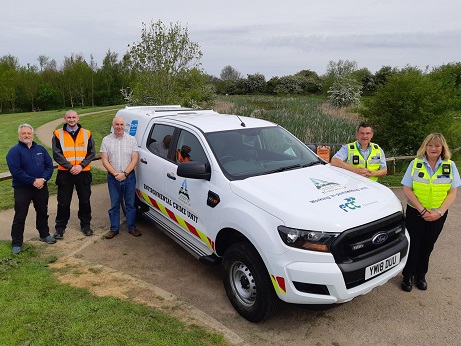 Fly-tipping is the illegal dumping of waste; it can be dangerous to human and animal health, and can pollute land or waterways. It is also expensive to clear; a recent Local Government Association report revealed that Councils in England spent just under one million pounds (£976,000) clearing fly-tipping in the last year ranging from Tarmac and asbestos, to tyres and even a boat.

But locally, the Tip Off campaign continues to make an impact, and earlier this year, Harborough District Council, in partnership with its contractor FCC Environment, won a National Recycling Award for tackling fly-tipping in the district.

Cllr Jonathan Bateman, Harborough District Council's Cabinet lead for environment and waste, said: "When the Covid-19 pandemic hit, we became acutely aware that a consequence could be an increase in fly-tipping, but thanks to the tenacity of our investigative team and the Tip Off campaign, we have not just sustained the reduction of the previous year, we have reduced incidents further and that is a phenomenal success. We'd like to thank residents who continue to be the eyes and ears of the community in providing information to help with our investigations. Sadly, the issue has not gone away and we all need to remain vigilant, particularly by always checking that anyone removing rubbish from your property is licensed to do so."

Residents and businesses are legally responsible for any household waste produced on their property. They have a 'duty of care' to check that any person or business disposing of their waste carries a valid waste carrier's licence.

This has been a key message which the Council has promoted through radio adverts and on social media, with any fines issued to fly-tippers publicised. The Council is also using covert CCTV in fly-tipping hotspots, in-car cameras, daily patrols, and warning banners on the side of its refuse collection vehicles.

Checks are also made whether businesses have the appropriate paperwork in place to dispose of the waste they generate, however – during the pandemic – the emphasis was on education rather than enforcement.

The Council also recently reported how a police helicopter had assisted in tracking and catching fly-tippers in the act locally.

For further advice about Tip Off visit www.harborough.gov.uk/tip-off