BIG Weekend of comedy is back with host of shows

The hugely popular BIG Weekend of comedy is back – and we're inviting people from all over the district to get ready for some laughter, chuckles, guffaws and giggles.

Tickets are already selling fast for this year's shows, which are part of the Leicester Comedy Festival, with the BIG Weekend taking place in Harborough district from Thursday 10 February to Monday 14 February 2022. 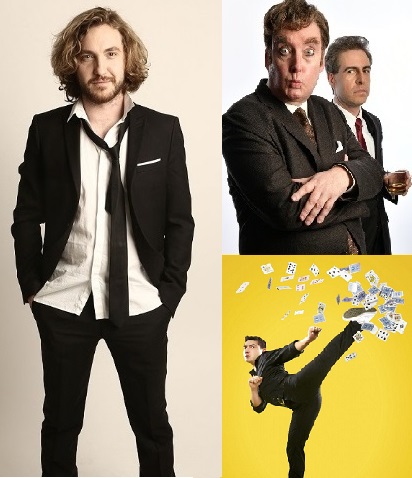 Some of the country's best comedy acts and entertainers are heading to the Harborough district - with something for all the family.

There'll be stand-up shows, comedy movie nights, kids’ entertainment, author events, variety shows, plays and much more – culminating on Monday 14 February at 7pm with the Live at the Market Hall comedy night at Market Harborough’s indoor market featuring Seann Walsh (Live at the Apollo, 8 out of 10 cats, Stand Up Central), and Aaron Simmonds (The Russell Howard Hour, The Stand Up Sketch Show).

The event begins blue-lights blazing on Thursday 10 February with Fair Cop Wip, with comedy from former police-sergeant turned comedian Alfie Moore at Lutterworth Town Hall, plus Brian Bilson – described as the “Poet Laureate of Twitter – in discussion about his latest poetry collection at Kibworth Community Library,  and Foxton Comedy Night on Friday 11 February which is raising funds for the local play area and features Leicestershire comic Sarah Johnson and a musical performance by award-winning comedian Kate Lucas.

The Instant Laughs Showcase comes to Lutterworth Town Hall on Friday 11 and Saturday 12 February with the best up-and-coming, unique and entertaining performers, and children’s show Koolgigs and The Has Bin Theatre is bringing puppets, live music and laughter to the Market Harborough Methodist Church on Saturday 12 February.

Funhouse – Live at the Lodge is a must-see at the Wycliffe Rooms in Lutterworth, featuring stand-up from Dominic Holland (father of Spiderman actor Tom Holland) on Saturday 12 February, and during the school half-term Kids Comedy Cabaret Club comes to the Market Hall on Monday 14 February from 2pm, featuring the animated stand-up of Big Howard and Little Howard (CBBC, The Slammer), high-flying tricks and deadly card throwing fun with Card Ninja.

People can also watch comedy films The Adventures of Priscilla Queen of the Desert and In Bruges at Harborough Theatre, on Friday 11 February.

Cllr Phil King, Leader of Harborough District Council, said: “It is genuinely exciting to have this event back as it always was. It is one of the highlights of the social calendar, and it’s great to see so many fantastic comedians and acts performing at venues across the district including our own Market Hall; I hope people come along and have a great time.”

You can book tickets online now for all shows. Please book early to avoid disappointment. For full details on the BIG Weekend and Leicester Comedy Festival 2022 visit www.comedy-festival.co.uk

The event is being supported by the Welcome Back Fund which is providing funding from the European Regional Development Fund (ERDF) to support the safe return to high streets and recovery from the pandemic.