Councillor Neil Bannister has been appointed as the chairman of Harborough District Council for 2022/23.

Cllr Bannister received the chains of office from outgoing chairman Cllr Stephen Bilbie at a Council meeting on Monday 23 May 2022. 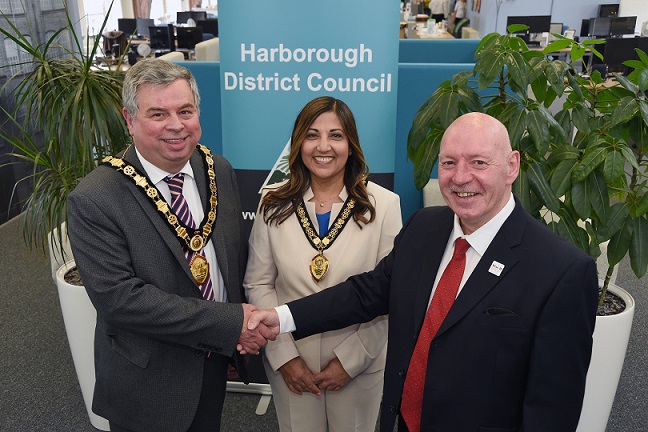 The Chairman, whose role is ceremonial, represents the Council at civic functions and at local events around the district.

Cllr Bannister said: “I am greatly honoured to be elected Chairman of the Harborough District Council. I will do my best to represent the Council as its First Citizen in all parts of the district with humility on my part and pride in the wonderful place that we live. I look forward to meeting a great variety of people and organisations in the coming year and to highlight the work of my chosen charity, the Leicestershire and Rutland branch of Motor Neurone Disease Association.”

Cllr Bannister moved to South Leicestershire with his wife and young family thirty years ago in 1992. He has served his community almost continuously since that time by Chairing the Claybrooke Magna Village Hall Committee and becoming a school governor at Claybrooke Primary School. After moving from Claybrooke Magna and settling in Broughton Astley, he joined the Broughton Astley Parish Council where he served for 13 years. In addition, he became a school governor at Hallbrook Primary School.

He currently works part time for the Crown Prosecution Service as a Crown Advocate appearing in local Crown Courts mainly in Leicester and Northampton. Cllr and Mrs Bannister now live in Lutterworth and have very recently become proud grandparents for the first time.

The new Chairman announced at the meeting that he would be inviting representatives from multiple faiths to speak at the start of each Council meeting to reflect the diversity of the community.

The Vice Chairman will be Cllr Rani Mahal, ward councillor for the Glen ward. 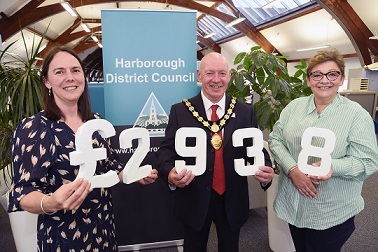 Outgoing Chairman Cllr Bilbie said: “During my time in office, despite challenging times of the pandemic with civic events postponed, I decided to use online technology to enable me to organise a quiz night and two sponsored bike rides; this was great fun even though we could not meet in person. I wish Cllr Bannister the very best in his role of Chairman and his chosen charity Motor Neurone Disease.”

At the Annual Council meeting, Cllr Bilbie presented a cheque for £2938.11 to his chosen charity Vista. The sight-loss charity had previously received an additional £113.46 directly from the charity bucket collection during the Chairman’s second Sponsored Static Bike Ride.

Kate Naish, Director of Income Generation, said: “Vista is absolutely delighted to receive this wonderful donation from Cllr Stephen Bilbie despite the challenges of the pandemic Cllr Bilbie found innovative ways to support us and fundraise for Vista throughout his time as Chair of the council, for which we are extremely grateful. Fundraising by people like Cllr Bilbie, is vital to enabling Vista to continue to offer services to people affected by sight loss throughout Leicester, Leicestershire and Rutland.”