Freedom of the district honour granted to local athletes

Gold medallists Dylan Fletcher-Scott and Laura Sugar have been granted the Freedom of the District for their amazing sporting achievements.

Olympian sailor Dylan Fletcher-Scott, a former Robert Smyth student from Market Harborough, who won a gold medal for Team GB in the Men’s 49er at the Tokyo  2020 Olympics, and Paralympian canoeist Laura Sugar, from Billesdon, who also won Gold for Team GB in the women’s KL3 Paracanoe in Tokyo2020, have each received the honour. 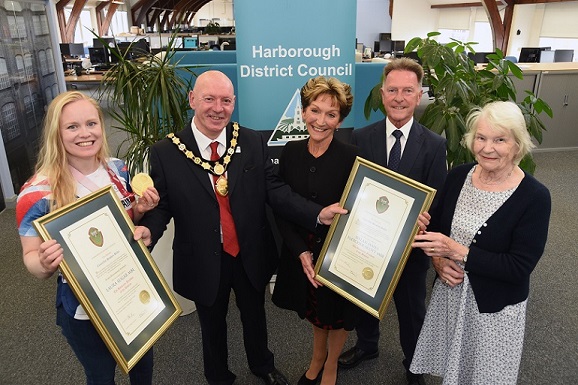 Laura accepted her honorary scroll at Harborough District Council’s Annual Council meeting on Monday 23 May 2022. Dylan’s proud parents Jane and Graham Fletcher, from Market Harborough, were delighted to accept the scroll on his behalf, due to him attending a training camp.

Last year, Harborough District Council unanimously agreed that the authority would confer the titles of honorary freeman and honorary freewoman respectively to the hugely successful pair.

The Freedom of the District is granted to “persons of distinction” who have “rendered eminent services” and have a strong association with the Harborough district.

Speaking at the presentation ceremony Laura said: "I really appreciate this award. To be in the local area and be a sportsperson, it’s really lovely when everyone comes together like this. The pandemic was such a huge thing, but I was really helped by my local community in Billesdon and that sense of community; for example I was lent a gazebo so I could continue training in my back garden while it was raining. I believe that everything can be taught through sport, so I try to visit schools as much as possible to give kids the exposure to sport and I say to them that you can just give it a go.”

His mum Jane said at the presentation: “My husband Graham and I are absolutely delighted to be here representing our son Dylan in receiving the honour that you have bestowed on him. From a very young age Dylan held a very deep-rooted, and very early, ambition to win a gold medal at the Olympic Games in sailing. He is very humbled by the support that he’s received from his school, his teachers, local businesses and charities, and of course the people of Harborough who have followed his journey. He is extremely honoured to have been awarded Freedom of the District.”

After attendees heard more about Laura and Dylan’s journey to success at the ceremony, Council Leader Cllr Phil King said: “I hope everyone finds the stories of both Laura and Dylan very inspiring; I know I did, and hopefully others will as well.”

Cllr King had previously put forward a motion to Council, which was seconded by Shadow Leader Cllr Phil Knowles, to grant the successful athletes Freedom of the District to recognise their achievements.

These are the first honours of their kind in the district since 2011, when the Royal Anglian Regiment were awarded Freedom of the District. 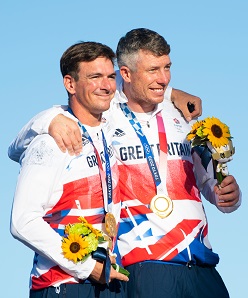 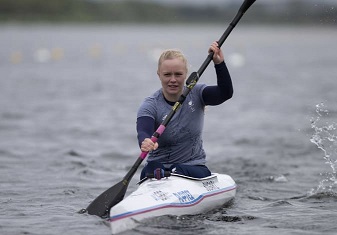