More charge-up points have been installed the Harborough district to meet the massive demand and increase in the use of electric vehicles.

Ten more electric vehicle charging points, with associated bays, are now ready to use, in Doddridge Road, St Mary’s West, and Angel Street car parks in Market Harborough – all chosen as they are a short distance from homes without off-street parking. Overnight parking is free at Council-owned car parks from 6pm to 7am.

The charge points have been installed, in partnership with EB Charging, after Harborough District Council was successful in securing Government funding to assist residents without off-street parking.

75 per cent of the funding for the £73,000 project is from Office for Zero Emission Vehicles (OZEV), with the rest coming from the Council and partners, including nearly £12,000 from EB Charging.

In 2018/19, there were 181 charges from existing charge points in the district, that increased by approximately five times for the following two years, and in 2021/22 there were 3,090 charges – over three times higher than the previous year. 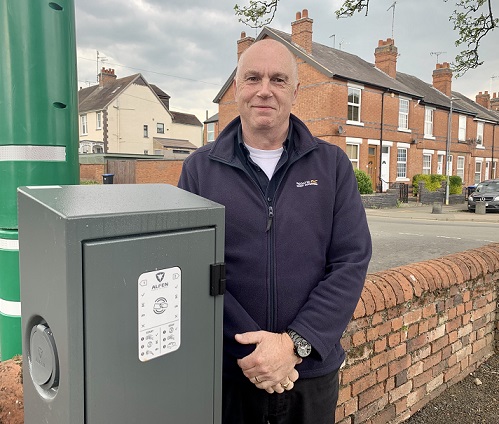 Cllr Jonathan Bateman (pictured), the council’s portfolio holder for Environment and Regulatory Services, said: “We’re very pleased these new charge-up points are operational; there is an increasing demand for them with the rise of electric vehicles on the road. Not only do they directly support our climate agenda to make the district cleaner and greener, they will also be available to local residents who aren’t able to have a charger at home because they don’t have off-street parking.”

The Council has previously introduced electric charging points in Orchard Road, Broughton Astley, School Road, Kibworth Beauchamp, Station Road, Lutterworth, the Commons, Market Harborough, as well as Harborough Innovation Centre and the Grow on Centre. There are also other public charge points across the district. Each charge point can serve two vehicles at a time.

According to the latest government data there are nearly 300 electric cars registered in Harborough District, but that figure is rising significantly, with some estimates predicting an increase to around 6,000 electric cars by 2025. Also, more than one in four new cars sold in December was electric.

Alex Calnan, CEO of EB Charging, said: “We’re very excited by Harborough’s plans and were happy to offer financial support to the project. We'd like to see zero emission towns and cities everywhere and these charge points will go a long way to supporting cleaner, healthier air in the district.

It will cost around 39p per kilowatt to charge vehicles, approximately £2.73 for an hour from a seven kilowatt charger, dependent on the vehicle.

Find out more about local electric charge-up points at www.harborough.gov.uk/evehicles