Distinguished guests were welcomed to the Council Chairman’s civic service which highlighted the work of those in public service. 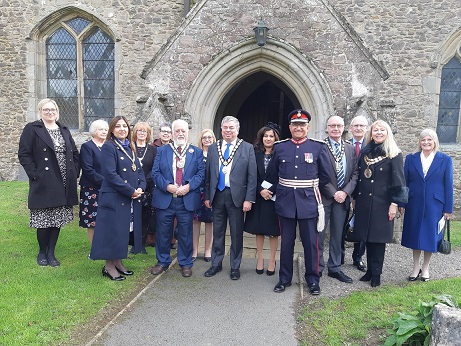 The Chairman welcomed over 50 guests to his first civic event, and the first the civic office have held since before the Covid pandemic.

A number of distinguished guests were in attendance, including the Lord Lieutenant of Leicestershire, Mr Mike Kapur OBE, civic heads from around the county of Leicestershire, councillors and representatives from Harborough District Council, along with personal friends and family members.

During the special service which was focused on ‘Recognising Public Service’, the Chairman gave a personal act of dedication to renew his commitment to serving others.

Reflecting on the event, the Chairman said: “I was delighted that my civic service was well attended and supported by so many. I was touched by the comments afterwards as to what a lovely service it was. My grateful thanks to Sister Liz for conducting the service in which we reflected on the humility and gratitude needed to better represent our residents in public office.”

The Chairman also acknowledged the generous donations that were made during the service, which will be shared between the Chairman’s chosen charity – MNDA Leicestershire and Rutland branch and the work of St Peter’s Church.