A striking art project, which has taken inspiration from Victorian corsets, has been unveiled in Market Harborough. 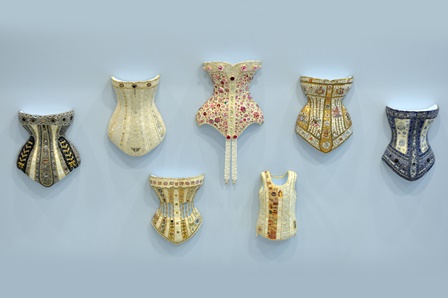 ‘Swedish Maidens’ – created by artist and sculptor Anne Schwegmann-Fielding – has gone on display in The Symington Building in the town and features seven elaborately decorated corset sculptures honouring the building’s heritage as a former Victorian corset factory.

The eye-catching pieces, which have created a buzz both locally and in wider artistic circles, were crafted in intricate mosaic form, from crockery, jewellery, buttons and coins which had been donated by local people.

The title of the project was inspired by a photograph of female factory workers stretching corsets around steam-filled copper forms nicknamed ‘Swedish Maidens’. A real-life example of these can be seen in the town’s Museum.

A poem entitled ‘Swedish Maidens on Parade’, by Martin Newell, is inscribed on the wall alongside the artwork.

A £15,000 Arts Council grant has helped bring the project to fruition. During the commissioning process, a panel consisting of cross-party councillors, district and county council employees, an art expert and an art student from Robert Smyth Academy deliberated a number of submissions from artists before choosing ‘Swedish Maidens’.

The artwork was officially unveiled on 17 February 2015, in the company of distinguished guests and those involved in the project. It is now on permanent display to the public in the main entrance of The Symington Building.

Artist Anne Schwegmann-Fielding said: "This has been one of the most inspiring projects I've worked on in over 20 years.  My aim was to revive the rich cultural history of the building by creating a series of mosaic corsets using new materials, bringing past and present together.  The donations of crockery and jewellery from the public, many of whom had family connections with Symington, caused a tangible reconnection to the historic hub of Harborough."

Cllr Paul Bremner, who sat on the project selection panel, said: "The mosaic patterned corsets Anne has created are simply stunning. She has created a set of seven marvels! The installation celebrates the heritage of the town, and is very fitting for a modern public building."

Cllr Barbara Johnson, who also sat on the panel, said: "I was particularly attracted to Anne’s proposal as it offered great opportunities for the community to get involved in the project. To include their contributions in the final work is an inspired approach designed to stimulate interest and build on our heritage."

Last year, the building underwent a major transformation as part of a Harborough District Council project to get the best use of its assets, in partnership with Leicestershire County Council.

The title "Swedish Maidens" was inspired by an image of female factory workers stretching corsets around steam filled copper forms. The workers nicknamed these "Swedish Maidens". Although made in Copenhagen, "Swedish" was a generic term for something "foreign". An example can be seen in the Museum. The designs are drawn from historical examples of corsets in the collection of Leicestershire County Council, some of which are on display in Harborough Museum. The mosaics, completed in 2015 by the artist Anne Schwegmann-Fielding, are constructed from crockery, jewellery, buttons and coins donated by local people who worked in the factory or had a connection with the firm. The windows of the Symington building were made by Crittall, another great British manufacturer, still going strong today. Metal fragments from Crittall windows have been included as a subtle link to the history of the building. Ceramic Transfers created with assistance from Students at Robert Smyth Academy depict images of the factory workers in various stages of corset creation along with corset marketing and labels. "Crockery collection days" were held in the town allowing local people, particularly those with a connection to the firm, to donate materials. Each plate, cup and saucer is carefully selected for its pattern and colour, painstakingly cut and shaped by hand and arranged onto the fibreglass base. A labour intensive process echoing the handcrafted workmanship within the factory. The image of the factory workers was also the inspiration for the poem "Swedish Maidens on Parade" by Martin Newell and hand painted onto the wall around the corsets.

his artwork was commissioned by Harborough District Council with a grant from Arts Council England to celebrate the heritage of the Symington Building, which was formerly the corset factory of R & WH Symington Ltd. The project was managed by Creative Leicestershire, which provides support for the arts, media and design sector in Leicestershire and Rutland; http://www.creativeleicestershire.org.uk/

Anne Schwegmann-Fielding is a British Sculptor/Mosaicist working on commissions for public and private clients. She incorporates artefacts into her works that have been donated by, or have connections to the people and location of each commission. Recycling and using objects with history are key elements and the inclusion of materials such as crockery, buttons, glass, mirror, coins and jewellery are typical. Anne’s work in the public realm began in the mid-1990s with a series of site specific works across Essex Hospitals. She has since created landmark works nationally and internationally. Commissions and clients include: Gardens of Easton Lodge, Channel 4 Kirstie’s Homemade Home, BBC2 Escape to the Country and Fantasy Rooms, Google, European Commission, Writtle College, Broomfield and Colchester Hospitals, Kent History & Library Centre, Crittall Windows, Colchester Zoo, Barratt Homes, Arts Reverie, India and various international symposiums in Germany. More work by the artist can be seen at: http://www.anneschwegmann-fielding.com/. Facebook https://www.facebook.com/pages/Anne-Schwegmann-Fielding-Sculpture-Mosaic-Recycled/320145658017957

Original is a black sateen corset with lace and gold details. The laces on the sides allow for growth of the baby, whilst still allowing the Victorian lady to maintain a fashionable shape.

This delicate whalebone and cotton corset was so named as once opened, it forms the shape of a bird’s wing.

This is one of the tighter fitting corsets, cut high above the hips. The original has a lacy top with large pink bows and extremely feminine.

This was sold as "The strongest and cheapest corset ever made" This was targeted at women in domestic service and is very plain apart from a tiny amount of blue stitching on the side, hence the use of a range of blue and white crockery including the very recognisable Staffordshire willow pattern.

Designed for "coolness during wear in tropical zones" this corset was for the travelling woman exploring the British Empire.

Inspired by the original 1908 Liberty Bodice.  At its height, Symington was producing over 3 million Liberty bodices a year. Transfers contain images of the factory workers and marketing materials for the bodice. 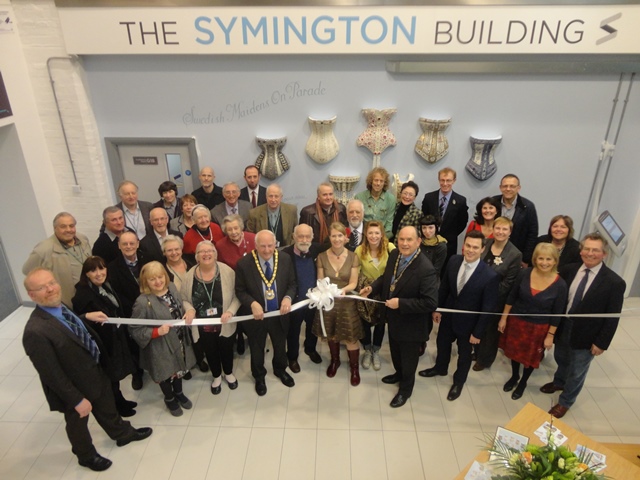