The River Welland rises above Market Harborough and flows through Northamptonshire, Leicestershire and Rutland, before reaching Stamford where it is one of the features that makes town so attractive.

Below Stamford, the river continues on its way to Market Deeping and Spalding where its character changes, slowing down as it becomes one of the four fenland rivers which drain the Fens, before entering The Wash.

People have relied on the Welland for thousands of years for water, food, drainage, transport and energy and as a result, the River and its valley have changed enormously.

While many of these changes have been positive, such as the creation of the ‘water meadows’ (land allowed to flood in winter providing flood alleviation and fertilising the land for grazing) which were such an important feature of the Welland Valley, others have been destructive. 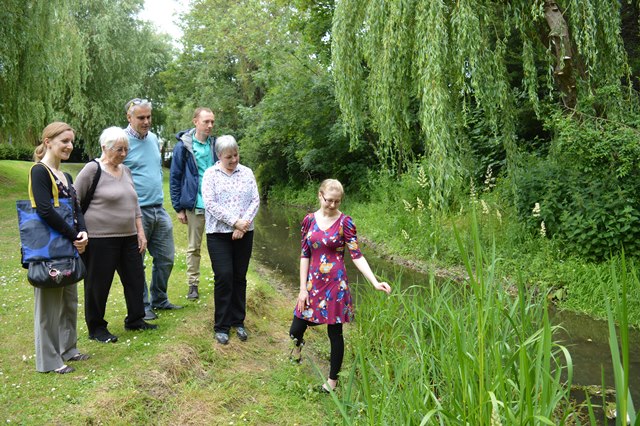 Although there have been vast improvements in water quality, we are left with the legacy of some of these changes, particularly those associated with the physical nature of the river, how it behaves in draining the land and how much water flows in it. There are also other newer pressures affecting the river, such as sediment run off from fields and urban areas.

The Welland Rivers Trust was set up in 2010 by a group of volunteer professionals who wanted to see a better river.

In 2012, the Welland Rivers Trust launched the ‘Welland for People and Wildlife’ project after securing £500,000 funding from Defra’s Catchment Restoration Fund. Partners to this project included the Environment Agency, University of Leicester and Harborough District Council.

After extensive design and engineering calculations, including detailed modelling of the river, planning permission and flood defence consents were obtained in 2013.

Construction works then began February 2014, pausing April to August to allow for the breeding season, and recommencing in September to November 2014.

The focus of the river improvements was to improve ecology and water quality by energising the low flow characteristics without affecting the high flow operation of the water body. The design to achieve this involved removal of 6 weirs, construction of raised flat banks called ‘berms’ to create a narrow meandering pattern, deep pooled sections dug and shallow riffles created with gravels.

With the removal of the weir barriers, the fish and eels are much freer to move along the river. There are now plenty of deep spaces for fish to hide, along with quality shallows ideal for spawning on the riffles. There has been a large amount of stickleback mating activity over the riffles, with the river boasting 3 species, including a rare one. The populations have been able to integrate without the weir barriers, with a decrease in bacterial and parasitically infected fish in sample catches.

During low flows, the river now has a much more varied pattern with the faster flowing shallows and slower deep sections. This provides unique conditions to form a variety of different habitats and dissuades single types of vegetation from overgrowing and choking the channel.

The marginal habitat space provided by the berms has flourished now boasting over 25 prominent species including marsh marigolds, water mint, veronica, yellow flag iris, water cress and many types of reed grass and sedges. Some of these were planted by the Trust and volunteers; however the majority have sprouted naturally indicating that the environment is now more favourable for wildlife to thrive. This is having a positive impact towards the water quality, with clearer, cleaner and better oxygenated water.

Reintroduction of habitats previously missing through Market Harborough has also encouraged a greater diversity of aquatic animals. Already, there are more species of aquatic invertebrates, particularly damselfly and dragonfly, which will continue to establish as the river settles into its new form.

Future work for the Trust involves a 5 year ecological monitoring plan with the University of Leicester of the river at Market Harborough. The Trust is also concentrating on improving the sediment and pollutant content of the water upstream of the town by creating an ecological plan for future physical improvement works.

Following the work done to improve water quality and wildlife habitats, in and around the river, the project has since received a commendation in the East Midlands Merit Awards 2015 for the fish passage and restoration work from the Institution of Civil Engineers.

Now more people and organisations are being encouraged to get involved in identifying what else needs to be done and helping to make a difference in the Welland.

To be a part of this exciting project please contact info@wellandriverstrust.org.uk