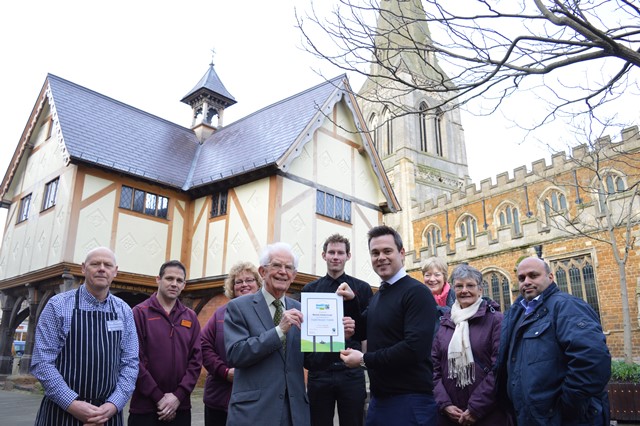 The achievement was celebrated by presenting the leader of Harborough District Council, Cllr Blake Pain, with the official certificate.

The town’s Fairtrade Group revealed its plans to promote Fairtrade to more community groups and businesses in the area by taking part in campaigns, including the nationwide Fairtrade Fortnight at the end of February.

This will include its annual school’s baking competition and a new venture to encourage local shops to have special window displays of the Fairtrade goods that they sell during Fairtrade Fortnight including a hidden wooden animal which children will be encouraged to ‘discover’. Cafes , groups and individuals will be invited to join in a national count of Fairtrade Breakfasts served. On March 5th at 7.30pm a concert by 'Old Friends'will include a Fairtrade stall and refreshments. Donations will raise money for the victims still suffering from the Bhopal Chemical disaster in India in 1984. This will be at the Methodist Church in Market Harborough.

Market Harborough was first awarded Fairtrade status in 2006 in recognition of the strong support for Fairtrade within the town, and the achievement of five qualifying goals, such as a wide availability of Fairtrade products in the local shops and catering outlets, high levels of support from local people, businesses, the council, faith groups and schools.

There are more than 50 organisations supporting Fairtrade in the town including offices, banks and churches.

Anita Beer, secretary to the Market Harborough Fairtrade Town Committee, said: “It’s encouraging to talk to children who are learning about Fairtrade at school and who then tell their parents and grandparents all about it!  But we all want to learn more about how Fairtrade gives people the dignity of working their way out of poverty and helps them to manage their environment sustainably in the face of climate changes.”

Adam Gardner, Communities Campaign Manager at the Fairtrade Foundation, said, “We’re so pleased that Market Harborough has renewed their Fairtrade status and laid out clear exciting goals to take Fairtrade further. Thanks to the ongoing support of the public and campaigners, an increasing number of farmers in developing countries are now selling products on Fairtrade terms, bringing them, a stable income, and the chance to trade their way out of poverty.”

Cllr Blake Pain, leader of Harborough District Council, said: “This is a fantastic achievement for the town and recognises the efforts of all those involved in the campaign.”

Fairtrade helps small-scale farmers ensure they earn stable incomes and have long-term contracts with companies.  In addition they earn the Fairtrade premium, which they invest as the farmer-owned co-operative democratically chooses, in projects that will benefit their business or community.

The FAIRTRADE MARK independently certifies that products meet economical, social and environmental standards.  As such, it is the most widely recognised ethical mark worldwide.  For more information about the FAIRTRADE MARK and how to apply for Fairtrade status visit http://www.fairtrade.org.uk/

To get involved in the Fairtrade campaign in Market Harborough. Please email Anita Beer at asbeer@hotmail.com or Donald Clinton-Smith at berkeley2@btinternet.com.  You can also join our Facebook Group by searching for Harborough Fairtrade Town.

The Fairtrade Foundation is an independent certification body which licenses the use of the FAIRTRADE MARK on products which meet international Fairtrade standards.  This independent consumer label appears on products to show that disadvantaged producers are getting a better deal from trade.

Latest available figures  show awareness of the FAIRTRADE MARK continues to be high in 2013, at a level of 77% and estimated retail sales of Fairtrade products in 2013 reached £1.7 billion.