Councillor Janette Ackerley has been elected as the chairman of Harborough District Council for 2016/17. 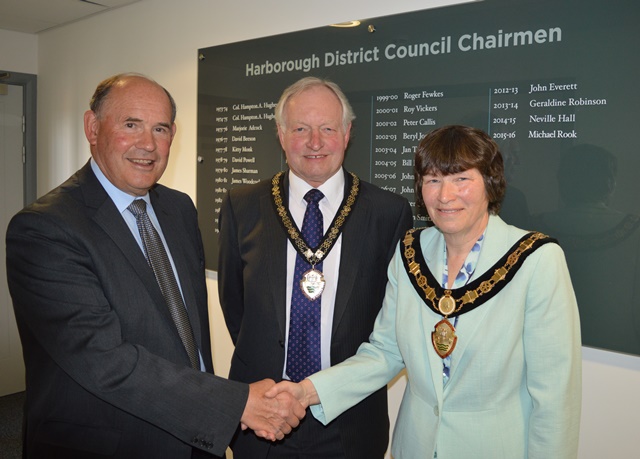 Cllr Ackerley, who is district councillor for the Lutterworth Swift ward, took over from outgoing chairman Cllr Mike Rook on 23 May 2016, having been vice chairman for the past year.

Cllr Ackerley, who lives in Lutterworth, has been married to Neil for over 40 years and they have two children and two grandchildren.  She is retired, after teaching Science at Lutterworth High School for over twenty years.

She became a member of Lutterworth Town Council in 1983 and has served as Lutterworth Town Mayor for three terms. She was appointed as a Magistrate in 1996 and since the closure of the court in Market Harborough is a member of the Leicestershire Bench.  She is qualified to chair both adult and youth courts.

Cllr Ackerley was first elected to Harborough District Council in 2007.

She enjoys cycling (having once cycled from Lutterworth to Tenby in Wales) and taking part in walks with Lutterworth U3A. Time and weather permitting, she likes to take her inflatable kayak on the local canals. A particular favourite spot is near Theddingworth with the beautiful Laughton hills in the background. She has also notched up 40 years as a poppy seller with the Royal British Legion.

Her chosen charity for the year will be the Rainbows Hospice for children and young people.

Previous Chairman Cllr Mike Rook attended over 90 engagements, during his civic year, including a special dinner for ‘unsung heroes’, an event at Nevill Holt in support of the Armed Forces Solders’ Charity, and lighting a beacon in the district to mark the Queen’s 90th birthday celebrations.

Cllr Rook will also be handing a cheque to Hope Against Cancer for over £2,500 raised throughout his year as Chairman.