Two local people were honoured this week by being presented with the prestigious Citizenship Cup.

Harborough District Council Chairman Grahame Spendlove-Mason hosted a presentation at The Symington Building on 7 August 2017 – in conjunction with the Market Harborough Civic Society – to award the Citizenship Cup to two worthy recipients. 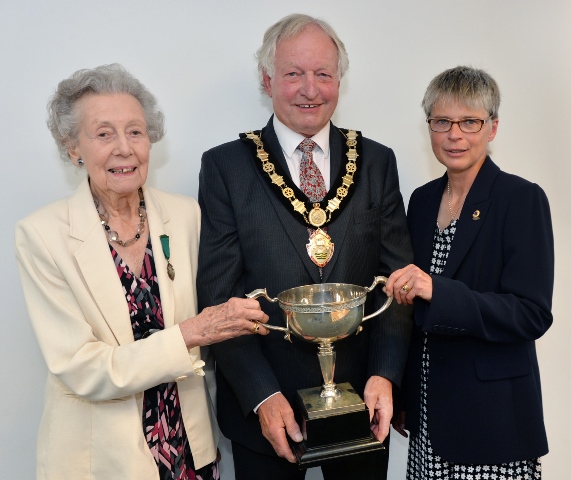 The Chairman presented the cup to Marjorie Adcock MBE and to Sarah Hill posthumously on behalf of her late husband Martin Hill LL.B MIT MTEP, for services to the community of Market Harborough and elsewhere.

Mr Hill was a member of several local fundraising organisations including the Lions and Round Table. He was also Under Sheriff of Leicestershire.

Both were nominated by a panel comprising representatives of the Civic Society, Chamber of Trade, Churches Together, Historical Society, Harborough Mail and Market Harborough Building Society.

Councillor Spendlove-Mason said: “It is a huge honour to be able to present this cup to two inspirational people who have devoted so much time to the community. I hope people are inspired by what they have achieved.”

The Citizenship Cup was donated anonymously to the Council in 1955 on the Diamond Jubilee of the Market Harborough Urban District Council with the intention of being awarded from time to time to individuals or organised groups of individuals in recognition of outstanding achievement enhancing the reputation of or reflecting credit on Market Harborough, and for distinguished Service rendered in the interests of the Town.

The cup has been looked after by Harborough Museum since 1991, and is part of the displays located on the first floor of The Symington Building in Market Harborough. It was last presented in 2011.

A spokesman for Leicestershire County Council, which has responsibility for the museum, said: “We are very proud to look after the cup so that everyone can see it and be inspired by the people who have been awarded the cup over 60 years.”

More information can be found on www.harborough.museum.org.uk