Newly-promoted Lutterworth Football Club has welcomed some of the council representatives who recently helped the club achieve some major improvements. 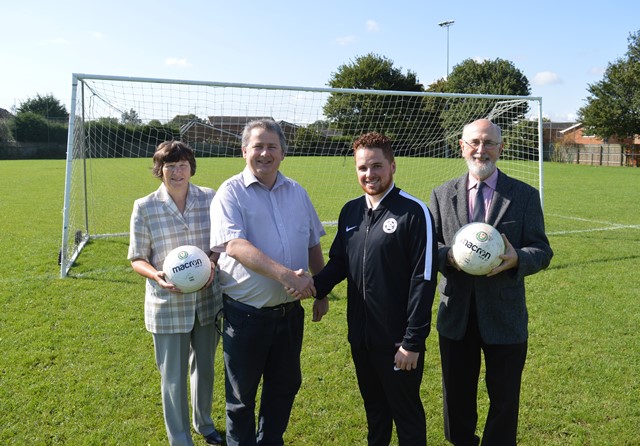 Earlier this year, the club was given a huge boost by Harborough District Council – which owns the club’s ground in Dunley Way, Lutterworth – when the council agreed a 27 year lease to the club to help unlock grants from the Football Foundation for essential grounds improvements.

The council also granted planning permission for floodlights – which have just been installed around the pitch – to allow the club to kick off later, at 3pm, which it is required to do in the United Counties League. The club has also been able to refurbish its clubhouse, creating new toilets, hospitality area and a medical room.

Josh’s dad and chairman of The Swifts Andy Dixon said: “We owe the council a huge thank you for all the help it has given to the club from all its various departments who have assisted the club in being in a great position to be able to plan for the future and move forward.

Andy added: “The club has seen a steady influx of local children opting to play for Lutterworth Town due to the success of its senior teams. With the help again from the council we have set up a mini soccer school on Saturdays from 10.30am until 11.15am which has become very popular with children under the age of eight. With the clubhouse having been refurbished this allows parents to sit in comfort and allow their children to participate in a safe and secure environment.”

Cllr Phil King, deputy leader at Harborough District Council and assets portfolio holder said: “We’re delighted we have been able to help this football club and hope they can build on the amazing success they’ve had. We also hope it will encourage more people in the community to use the excellent facilities now available.”