A couple who failed to remove an unlawful building on their farm have appeared in court. 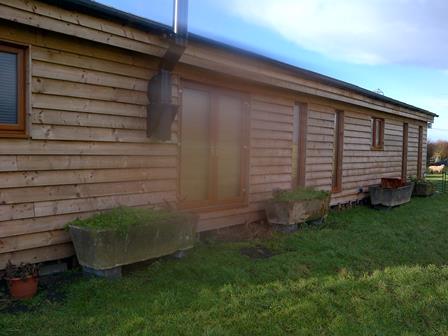 In June 2014, Harborough District Council issued an enforcement notice requiring the owners, Ruth Hood and Karl Robert Dann, to demolish a building erected on their land without planning permission at Touchwood Farm, Bowden Lane in Welham.

The enforcement notice required the demolition of the building (pictured) by 13 July 2014 but, despite the threat of an injunction, the notice was ignored.

At Leicester County Court on 18 September 2017, Harborough District Council was granted an injunction order requiring Ms Hood and Mr Dann to remove the building and restore the land within the next 56 days.

The defendants signed  a ‘form of undertaking’ agreeing to do this and the judge was clear that if they did not comply with this, they would be in contempt of court and liable to imprisonment.

The judge also ordered Ms Hood and Mr Dann, who were present at the hearing, to pay £2,000 court costs.

Councillor Jo Brodrick , who has responsibility for planning enforcement at the council, said: “This court case sends out a strong message that anyone who wilfully flouts planning laws will be dealt with by our enforcement team and, if necessary, by the courts.”