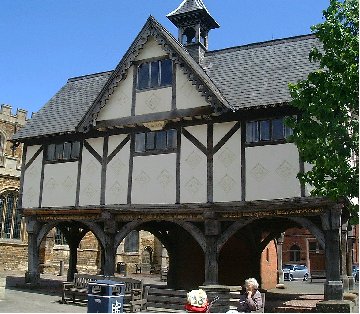 To support the occasion, the Market Harborough Branch of The Royal British Legion (RBL) will host a special ceremony which will see the Old Grammar School in Market Harborough’s town centre illuminated for the period of this year’s poppy appeal from Saturday 28 October 2017 to 12 November 2017.

The ceremony will be held on the evening of Saturday 28 October 2017 to ‘switch on’ the illumination, attended by Harborough District Council’s vice chairman Councillor Lesley Bowles, Chairman of the RBL MH Branch John Standish, and other distinguished guests.

John Standish, Chairman of the RBL’s Market Harborough branch, said: “This is the first year that a local iconic building will be illuminated and I would like to thank Harborough District Council and particularly Market Harborough and the Bowdens Charity for their assistance in making this happen.”

Michael Rook, Harborough District Council’s armed forces champion said: “This will look spectacular I am sure and I hope it serves as a poignant reminder of those who gave their lives in The Great War and other conflicts. It is so important we all continue to support the RBL’s appeal and wear our poppies with pride.”

Sara Robinson, of the Market Harborough and Bowdens Charity, said: "Throughout its long history the Market Harborough and the Bowdens Charity has been, and remains, committed to assisting the community and the charity is delighted to support this local initiative. It is extremely important to honour the sacrifice made by all those men and women from our town who served, fought and died or who were injured in the cataclysmic events of the First World War and to reflect upon the effect of the war on individual combatants, their families and the wider community."