The Government’s newly-elected Small Business Commissioner joined local businesses at a special breakfast event this week to talk about his role and how he can help.

This was the Commissioner’s first engagement session with small businesses in his new role. 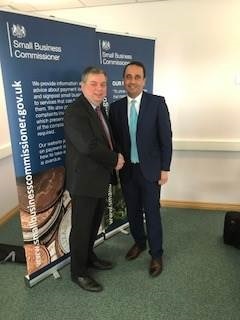 Mr Uppal (pictured with the Harborough District Council Leader Neil Bannister) met with local business representatives and councillors from across the Harborough district to discuss how the Government can help small businesses resolve late payment disputes between small and large businesses.

Leader of Harborough District Council Neil Bannister, who attended the event, said: “This was a very informative and well-attended event. It was a real coup for local business people to be able to quiz such a high profile Government representative.  I’d like to thank Mr Uppal for coming along and sharing his advice with the businesses present and engaging in such lively debate.”

Small Business Commissioner Paul Uppal said: “I‘d like to thank Harborough District Council for hosting a great event.  I found it a really interesting event meeting and listening to the concerns raised by small businesses. I was particularly impressed with the quality of the discussion and the enthusiasm from everyone who attended, and am determined that together we will tackle the UK’s late payment culture.”