How Broughton Astley is tacking the Covid-19 Challenge
At the beginning of March, Broughton Astley Parish Council stated that a response for the Covid-19 pandemic would be needed in the village. Measures would need to be put in place and an outline of a possible local approach started to form. A telephone number was published for anyone needing help or assistance to call.
An A4 poster was then produced giving details of the group which was delivered to every shop in the village to display. An A5 leaflet was also created which was to go out to all households in the village giving details of what the volunteer group could offer in the way of services. Things moved very quickly as a central free phone number was set up. This enabled multiple calls to be handled at any one time and to take calls out of hours. At the same time, a dedicated email address coordinator@broughton-astley.gov.uk was set up for the group.
A Facebook group was also set up and became available to any Broughton Astley resident who wanted to join. This helped advertise various services and kept everyone engaged and community minded. Following this the group also registered our group details with Covid-19 Mutual Aid UK, enabling our group to be identified by anyone searching the site for their local group. This proved worthwhile as we received calls from Isle of Man, Scotland, Norfolk & Devon from younger relatives concerned about their elderly relations alone in Broughton Astley. 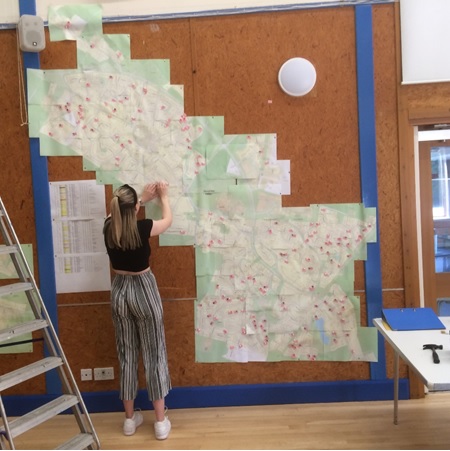 As the COVID19 pandemic got worse an operational hub was established in the village hall’s sports hall and the Broughton Astley Volunteer Group (BAVG) was created. Many elderly people wanted help with their normal food shopping and while the smaller shops were able to handle payments over the phone, supermarkets could not. The existing community group Broughton Alive stepped in to deploy a mobile card reader system which accepts contactless and card payments so we could cope with the supermarket shops if need be.
With the virus spreading, the pharmacy’s delivery service lost its normal drivers and so BAVG stepped in to provide a delivery service to people getting their prescriptions from the pharmacy in Broughton Astley.
BAVG also oversees a Swap Shop in a separate building on the village hall site. This is open from 9.30 – 4.00 Monday to Friday and is where members of the public can collect books, DVD’s, jigsaw puzzles and games. Donations to the shop are quarantined for a minimum of three days, there is also a limit on numbers in the shop to enable social distancing at any one time.
An appeal went out from the group for material, elastic and buttons for the craft groups who are currently busy making PPE for the frontline workers. This received a fantastic response and is still being supplied regularly. Through a local organisation ‘Sows and Grows’, the group received flowering plants and bulbs which were distributed to our clients and the remainder were offered to our volunteers and residents of Broughton Astley for a donation to the NHS.
The BAVG have assisted 179 households with shopping, delivered over 1265 prescriptions, arranged on average 10 medication requests per week direct to the doctors, organised over £1,700 credit or debit card payments for either cash or payment for shopping, delivered approximately 140 kilos of food weekly to the local food bank, organised emergency repairs for isolated residents, assisted the local butcher delivering in and around the village, have raised, so far, over £550 for the NHS through donations received because of the distribution of the salvaged plants, as well as running the swap shop facility.
The volunteer groups’ work will be ongoing and is now planning for the future beyond Covid-19. The services provided will obviously adapt to the “new normal” but residents are already saying this “an essential lifeline within the village which needs to carry on”.
To contact the Broughton Astley Volunteer Group please email coordinator@broughton-astley.gov.uk or call 0808 5284477