A Kettering woman has been fined £300 after her rubbish was found dumped in a country lane in the Harborough District. 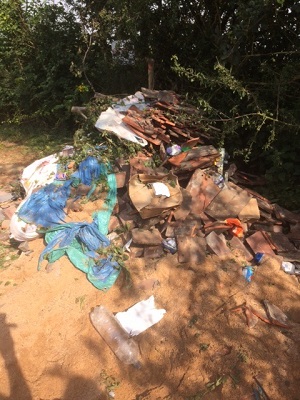 On 16 July 2019, the woman paid an unlicensed waste carrier to dispose of a large amount of rubbish, which was then illegally dumped at Gibbet Lane in Shawell.

The rubbish (pictured) consisted of construction waste and was reported to Harborough District Council by a worker at the landfill site nearby.

The woman admitted failing to take all reasonable measures available to secure her waste, by letting someone else dispose of the rubbish without checking they were correctly registered to do so.

She was issued a fixed penalty notice after admitting to the offence under the Environmental Protection Act.

It is the fifth fine to be issued in four months as part of the Tip Off campaign aimed at reducing fly-tipping across the district.

Cllr Jonathan Bateman, Harborough District Council’s portfolio holder for Environmental Health, said: “Our environmental crime team work hard to take action against people that dump rubbish illegally and we ask people to report anything suspicious that they see. This fine should be a warning to anyone who is tempted to use unlicensed waste carriers, as enforcement action will follow.”

The Council’s large waste items for collection service allows for up to three large household items or 12 sacks of waste to be collected for a charge of £34.17.

Harborough District Council's anti-flytipping campaign 'Tip Off' continues to help people report cases of fly-tipping and provide information to help with investigations. It has also resulted in a number of prosecutions and fines.

Earlier this month, the Council successfully prosecuted a man who failed to pay a fine after rubbish removed from his house was fly-tipped in Great Bowden.