If your green bin is scheduled to be emptied next week, please ensure that it is presented until a collection is completed. Collections that were suspended w/c 22nd Nov will take place w/c 6th Dec.

Fly-tipper must pay £400 after being caught red-handed

A man who used a borrowed van to dump rubbish a country lane was caught in the act by a CCTV camera.

The man, in his 30s and from Leicester, drove the van to London Road in Great Glen on 10 October 2021 and illegally dumped its contents, including furniture and other household items (pictured), on to the side of the road – but the Council’s CCTV cameras caught him on film. 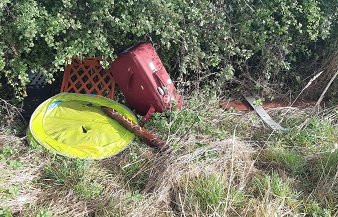 Harborough District Council’s enviro-crime team traced the van to a business, but when they contacted its director, it transpired the van had been lent by an employee to a friend who used it to dump the rubbish.

When interviewed, under caution, the man who borrowed the van admitted the offence, and was ordered to pay a £400 fixed penalty notice.

Cllr Jonathan Bateman, Harborough District Council’s Cabinet lead for environmental services, said: “This is another great result from our officers and sends a clear message that fly-tipping will not be tolerated in our district, and that we will do all we can to catch those responsible for blighting our countryside.”

This latest prosecution follows a number of fixed penalty notices – five since April 2021 – issued by Harborough District Council for fly-tipping in recent years, as well as successful court cases, forming part of its award-winning Tip Off campaign to crackdown on the illegal dumping of waste in the Harborough district.

The campaign has resulted in a significant reduction in fly-tipping in the district over the past two-years, bucking the national trend.

Find out more about Tip Off on the Council’s website at www.harborough.gov.uk/tipoff